Join Deaksy for the Local Breakfast Show weekdays from 5:30am – 10am, Thanks to Gippslands Harvey Norman Stores in Moe, Warragul and Wonthaggi.

It’s all the fun of the fair complete with out of date packet of chips and plastic novelty toy banned in 5 states!

The E-File, “Old School” On This Day, Your Day By The Stars, Traffic Updates every 15 Minutes, Gerald Quigley on a Wednesday, Throwback Thursday and Free Plug Friday & We’ll Tighten Up your Tuesday with Stefan from Gregories Fitness – there’s something for everyone.

The Ultimate Ear Test cash jackpot is now valued over $2000 dollars – its worth putting your hearing to the test. 4 Voices

Congratulations to Daniel of Warragul who identified our last ear test and won $2950 back in May 2020 – the last voice was
John Taylor – The bass player from Duran Duran. 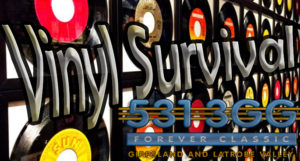 Vinyl Survival has always been interactive with you the listener choosing the outright winner. Now it has evolved to a new level – Introducing the “Pit Of Hits!” Each weekday morning at 7:10 we will pull one song from the Pit of Hits – that song could be one that either Deaksy, Trent or Lance has pre -selected OR it could be one of yours! Whosoever is pulled – the others have to follow the theme of that song [be it a word or whatever] that they believe is better and will get the most votes. If we pull out a listeners song – the 3 of them will have to put in a song – giving you 4 songs to choose from. Use the form below to nominate your favorite song to go into the pit. The song that is pulled out will set the theme for the others to come up with their own combatant to up go against that song. Then it is up to you to choose the winner from the 3 songs or 4 if a listener suggestion is pulled out.